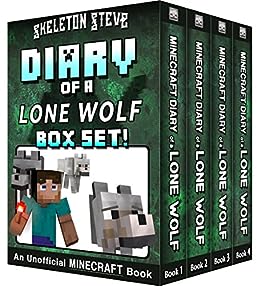 Love MINECRAFT? **Over 58,000 words of kid-friendly fun!**
This high-quality fan fiction fantasy diary book BOX SET is for kids, teens, and nerdy grown-ups who love to read epic stories about their favorite game!

All FOUR "Lone Wolf" Minecraft Diary Books in ONE!!!

h3>Dakota was a young wolf, happy with his life in a wolf pack in the taiga forest where he was born.

Almost fully-grown, Dakota was fast and loved to run. He had friends, loved his mother, respected his alpha, and had a crush on a young female pack-mate.

But his life was about to change forever when his pack was attacked by the Glitch, a mysterious and invincible horde of mobs that appeared and started killing everything in their path!

Now, he was a lone wolf. With the help of Skeleton Steve, would he ever belong to another pack again? Would they escape the Glitch and warn the rest of Diamodia?

In fact, life is good! With his new alpha, Steve, and his new pack mates, Rex and Winter, the young wolf is really loving his life in the village! What a change from his old like with his pack in the forest, and the nightmare of being on the run from the Glitch!

But peaceful times are interrupted one night when a strange storm causes a massive explosion in town, and Steve takes the three wolves down into the caves under the village to help recover a lost villager child! Will Dakota and his friends be able to protect their new alpha from undead monsters deep underground? And what happens if they get lost??

Lost in the deep, deep darkness!

After delving into the underground caves under the village to help Steve find the lost villager child, Dakota and his friends are separated from their alpha and hopelessly lost themselves! Now, the wolves have to make a plan to get back to the surface, but first things first–Dakota and Rex have to find Winter! She’s missing and alone somewhere deep in the dark.

But even if the trio reunites, how will three hungry wolves from the surface world ever survive the dangers of the Diamodia underworld? And once they attract the attention of a swarm of cave spiders in an abandoned mineshaft, is the Lone Wolf and his friends destined to become arachnid appetizers?

How does a lone wolf save his friends against all odds??

Dakota is lost down near the bedrock, deep underground. His new pack mates, Rex and Winter, are poisoned and webbed up as future food in a huge cave spider nest in a dark abandoned mineshaft! They’ve all lost their alpha, and have no idea how to get home…

Could this misadventure in the cave system under Dakota’s village get any worse?! Now, the lone wolf is alone, starving, still lost deep underground, and has to save his new friends–his new family–from dozens of venomous spiders AND find the way back to Steve on the surface! Will the lone wolf survive and bring his new pack to safety? Or will he be defeated by any of the number of dark and terrible things against him??

Buy this BUNDLE of books and read the "Lone Wolf" Quadrilogy TODAY!

Join the Skeleton Steve Club! Check out my main website for details–it’s in the book!
(Get free Minecraft goodies, tips, books, maps, skins, seeds, and more!)

Author’s Note: This is an unofficial Minecraft book. Minecraft is a registered trademark of, and owned by, Mojang AB, and its respective owners, which do not approve, endorse, sponsor, or authorize this book.
Minecraft®/TM & © 2009-2016 Mojang AB/Notch